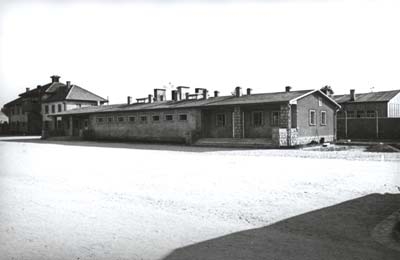 Prisoner brothel, presumably spring 1943 (photo credits: SS-photo, Courtesy of Museu d’Història de Catalunya, Barcelona: Fons Amical de Mauthausen)In June 1942, Reichsführer-SS Heinrich Himmler ordered the first prisoner brothel in a concentration camp to be opened at Mauthausen. A few months later, a brothel was opened in Gusen. Some ten prisoners from the women's concentration camp Ravensbrück were forced to work as prostitutes and were sexually abused. With a formal ‘granting of privileges’ the SS attempted to provide incentives for male prisoners to work hard. Only selected prisoners were allowed to visit the brothel upon submission of a formal application and payment of a fee. Only prisoners who had received a reward note from the SS for their work in the arms industry were able to raise the fee. The inconsistency between the brothels instituted by the state on the one hand and the prosecution of prostitutes in the Third Reich, on the other, is remarkable: prostitution was punishable by imprisonment in a concentration camp.