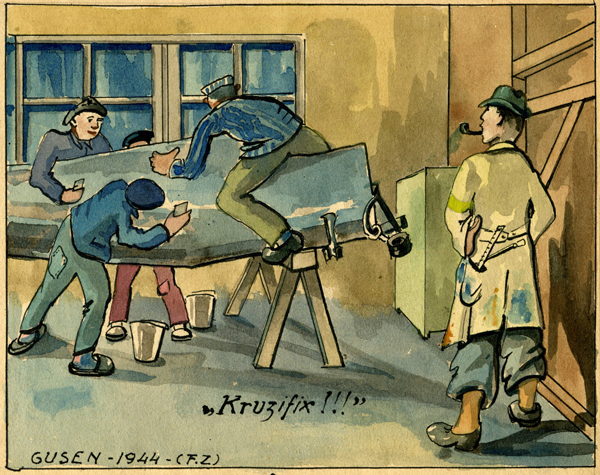 "The wings and fuselages were produced in large wooden hangars, built by the prisoners themselves. Shifts were 12 hours working time. Reveille was at 4:05 am. [...]

Our group, which was in charge for wing assembly, comprised 500 prisoners per shift. [...] In the production hall, the riveting with compressed air produced a powerful noise so that you couldn’t hear a word that was said. The wings were assembled in a slipway on a conveyor belt line. Every department was headed by a non-military supervisor (Zivilmeister) and a Kapo. Most of the Kapos were German criminals. They held a whipcord in their hands, controlling our work. Even the smallest error was considered to be an act of sabotage. Punishment was 25 lashes with the whipcord on one’s buttocks. A Russian was subjected to 30 and a Jew to 50 lashes. There were prisoners from almost all nations. Only a small share of the prisoners were German.

Communication during work was not easy. German was the official language. Standard daily production output was 10 wings per shift. Much of it involved manual work. Unskilled prisoners cut, bent, riveted, turned the sheet metal. To warrant faultless production, there was also an inspection phase. Prisoners also took care of this. Russians and Jews were excluded, however. I once overlooked two rivets that had not been set straight. The Zivilmeister reported this to the Kapo. I was punished with 10 cane lashes for each rivet.

Once a wing was ready, fifteen to twenty prisoners lifted it out of the slipway and carried it to the spray paint shop."