Forced Labour in the quarries 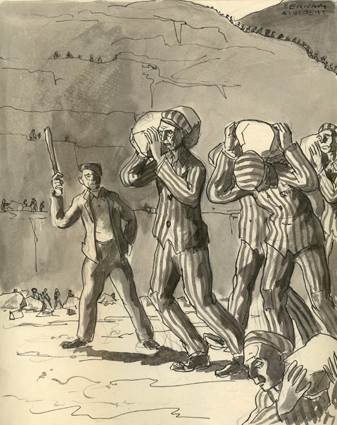 „Gusen II: Der Steinbruch“. Drawing by French prisoner Bernard Aldebert, undated [1945/46]. (Mauthausen Memorial / Collections)The stone quarries of Gusen were pits of terror. Work in the stone quarries was especially arduous, particularly for those prisoners who were not assigned as stonemasons to perform skilled tasks. Stones were transported and worked irrespective of the weather conditions and temperature. In spite of a high accident rate, only minimal medical care was provided.

Moreover, prisoners were subject to arbitrary mistreatment by ‘Kapos’ and the SS. According to Leopold Trauner, a civilian chief warden of the Kastenhof quarry, more than 3,000 prisoners suffered a violent death or died of hard labour.

A report by the Italian prisoner Vincenzo Pappalettera:

"The hardest work was the work in the transport column, the penal company of Gusen. Those allotted to this company had to carry stones weighing about 50 kilos on their shoulders. In single file, they had to move from quarry to the stone mill at the double quick, from morning till evening: if a gap formed in the row, the first to fall behind was pushed aside and bludgeoned and kicked to death. Just like railway cars they had to keep in a row and move along in lock step. If a prisoner lost his wooden shoe, he had no time to stop and put it back on, and he had to continue barefoot, injuring himself on the sharp gravel. The prisoners lasted one or two weeks. Those who were not bludgeoned to death, fell over of exhaustion and the Kapos stoned them to death right then and there. In the evening, those who were still alive carried the corpses of their dead comrades to the crematorium."