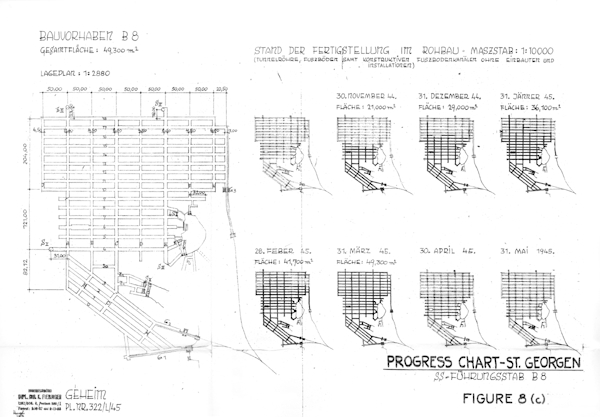 Two tunnels systems were planned for the area near the KZ Gusen. In late 1943, construction of the "Kellerbau" system commenced near the Kastenhof quarry, but soon ran afoul of geological difficulties. The 8,000 m² of tunnel which were completed were used as production facilities for Steyr-Daimler-Puch AG. and Messerschmitt GmbH. Regensburg. Construction work caused numerous accidents and led to the death of a significant number of prisoners.

In 1944, at St. Georgen, the SS began one of the major tunnel projects of the German war-time industry codenamed B 8 / "Bergkristall" which was meant to house subterranean facilities for the production of Messerschmitt fighter planes.

On 2 January 1944, the first 272 prisoners were transferred to the "Gusen Bergkristall-Bau" (construction of Gusen Rock Crystal). This date marks a watershed in the use of KZ prisoner labour at Gusen. To house the thousands of prisoners necessary for the project, the barracks complex of Gusen II was built.

From March 1944, tunnel construction was supervised by the SS-Sonderstab Kammler, which had already been in charge of more than 20 such major projects in other parts of the Reich. Hans Kammler, head of Department C ‘Construction’ of the SS Economic Administration Headquarters, had already demonstrated his "reliability" in the autumn of 1943, during the relocation of rocket production to underground facilities, when he had pushed the construction projects forward without the slightest regard for the health or survival of KZ inmates. The same principles came to determine the construction of the Bergkristall tunnels which caused massive deaths at Gusen II. As with most other subterranean projects on Austrian territory, the tunnel project had been planned by the engineering office of Karl Fiebinger in Vienna.

In August 1944, 3,684 concentration camp prisoners had already been assigned to work in the construction project and the number of prisoners at times exceeded 6,000. Following the completion of the first tunnels in autumn 1944, Messerschmitt GmbH. Regensburg took up production of its Me 262 jet fighter.