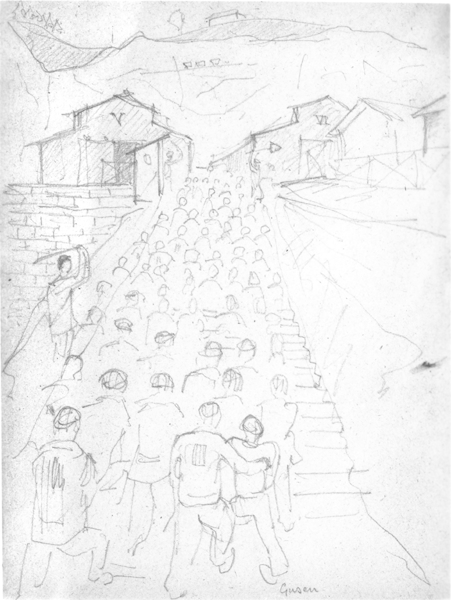 Häftlinge auf dem Weg zur ihren Arbeitskommandos, Zeichnung von Lodovico Barbiano di Belgiojoso, o. J. (A.N.E.D., Mailand)Steyr-Daimler-Puch AG. (SDP) was the largest arms producer in Ostmark. It was a subsidiary of the "Hermann Göring" Reichsworks from 1938 to 1942 and expanded considerably during the war years. SDP was also the first arms corporation to deploy concentration camp prisoners in its airplane production in Steyr starting in 1941. Especially the Managing Director Georg Meindl's personal contact to high functionaries of the SS and NS regime gave SDP early and preferential access to labour from concentration camps.

In February 1943, the ministry of armament commissioned SDP to increase its Karabiner rifle production. SDP and the SS came to the agreement that the concentration camp Gusen would serve for rifle part production, going on-line as early as March 1943. As agreed, SDP ran production on its own account, while DESt. provided the infrastructure and the SS Economic Administration Headquarters furnished the concentration camp prisoners. This agreement did not only have economic benefits for both parties: The SS was able to obtain additional weapons, bypassing the controls of the Army High Command while SDP was able to use concentration camp prisoners to offset the shortage of labour due to the war.

SDP continuously expanded its production in Gusen. At the end 1943, some 1,300 concentration camp prisoners worked for SDP in eight different production halls of Gusen. After the Steyr facilities had been severely damaged by Allied air raids on the 23rd and 24th February 1944, barrel production was relocated to Gusen. In the second half of 1944, the Radom and Warsaw gun factories, by then incorporated into SDP, were evacuated to Ostmark; most of the machines were accommodated in the tunnels of Gusen. As the war was ending, some 5,000 prisoners produced Karabiner rifles, machine guns and airplane engines in 18 halls and in underground tunnels.