Days of chaos and lynch law 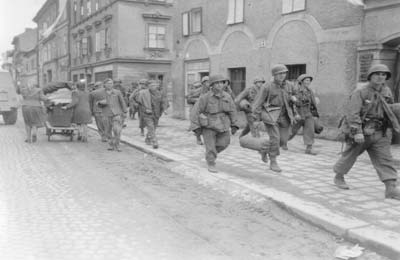 Members of the 11th Armored Division with liberated concentration camp prisoners in Linz, 7 May 1945. (photo credits: US Signal Corps Photo; Courtesy of NARA)‘One could say [...] that Gusen has been dissolved. Everything in the camp has been looted. Of the 250,000 tons [presumably 25.00 kilograms] of stored potatoes only one ton remains.[...]
Apparently, many armed [prisoners] are marching towards Linz, where they are looting everything. Apparently it had not been possible to boost the morale of those that remained.’

Excerpts from the transcripts of the meeting of the International Action Committee of Mauthausen, May 6, 1945 (Department of Contemporary History, University of Vienna).

When the US liberators left again they took with them some 800 guards of the Vienna Fire Protection Police as prisoners of war. These measures caused a power vacuum in liberated Gusen, which left its mark on the prisoners and the camp’s immediate neighborhood between the evening of May 5 until the arrival of the new US military administration in late afternoon of the May 6.

This period in the history of the concentration camp of Gusen, i.e. several days before the Allied liberators set off their ‘flood of images’, remains largely in the dark. Today, this period is documented primarily in the memoirs of the survivors. 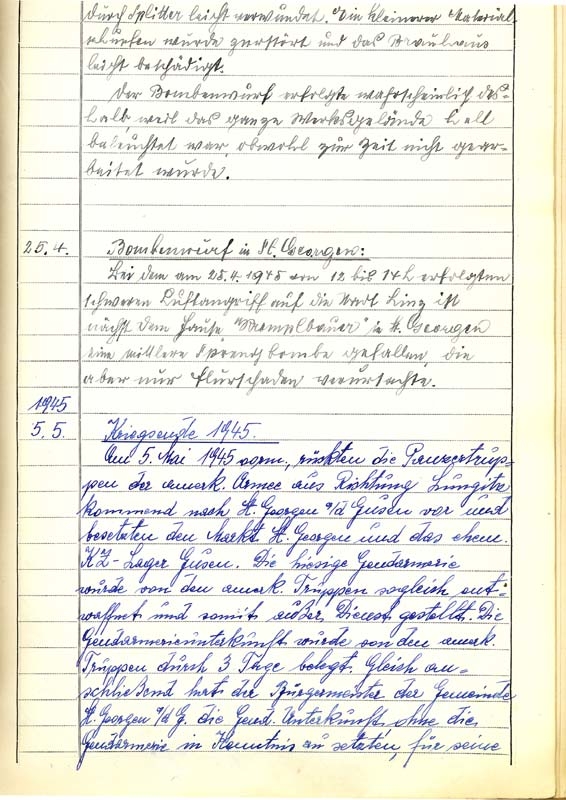 Exposé of the chronicle of the county police St. Georgen an der Gusen concerning incidents on the 5th of may 1945, page 1 Within one day, and contrary to the orders given by General Eisenhower over the radio, most of the approx. 21,000 prisoners who had appeared to roll call on 5 May 1945 in Gusen left the camp to look for food which they needed to survive. Only about 3,000 people, mainly the sick and weak, were still in the camp on 6 May. Several groups of prisoners, some of them armed, advanced as far as Linz, where they met the 11th Armored Division that had marched in the day before.

After the guards had withdrawn from Gusen, the hour of revenge on the Kapos (prisoner supervisors) who had stayed on in the camp began for many prisoners.
SS rule in the concentration camps included a select group of prisoner functionaries, or ‘Kapos’ in the jargon of the camps, who were given certain authority. They were delegated administrative tasks as well as supervisory roles, which they often carried out with extreme brutality. These prisoners were usually caught between the fronts: on the one hand, their job virtually guaranteed their survival – as long as they remained in the SS’s favor. On the other hand, this is precisely what estranged them from the other prisoners. In addition, they were able to use their position either to protect fellow prisoners or to brutally assert their own interests. 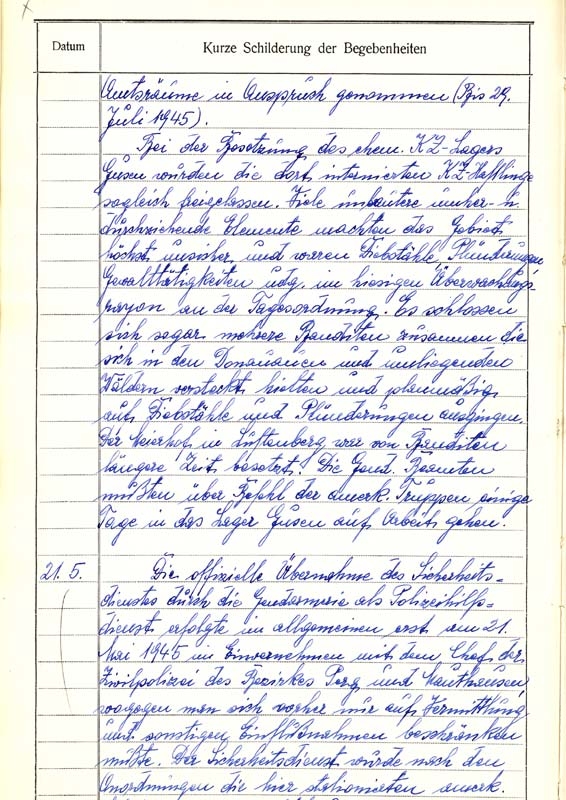 Exposé of the chronicle of the county police St. Georgen an der Gusen concerning incidents on the 5th of may 1945, page 2 On 5 and 6 May, the long suppressed hatred for the ‘Kapos’ erupted violently. Many prisoner functionaries, not all of whom had committed crimes against fellow prisoners, were killed by angry mobs of prisoners.

‘My attention was directed towards the cries and the noise in the room. The Russians dragged the “Blockältesten” out of the room. He had been very rough with the prisoners and had beaten them up for every minor transgression, especially the non-German prisoners. They tore off his clothes and beat him and kicked him. Everyone wanted to relieve some of his anger. Eventually a young Russian picked up a chair and hit him over the head with it as hard as he could. The man fell and no longer moved.

When Rudi and Hadschi came back it was already dark. They said that they had been in a block were the majority were Polish. One of the Poles stabbed Kapo Marjan to death with a knife. He had been in Steyr with us and was a decent bloke; when he became a Kapo he displayed all the qualities that a Kapo must have. He was also a Pole and he treated his compatriots as roughly as the others. One of his compatriots rammed a knife into his chest with such force that he was literally nailed to the bed.

The Russians put our “Stubenältesten” head first into a barrel of water, which was there in case a fire broke out. He kicked and wriggled his feet for a while, but soon he stopped moving and his legs fell back over the barrel.’