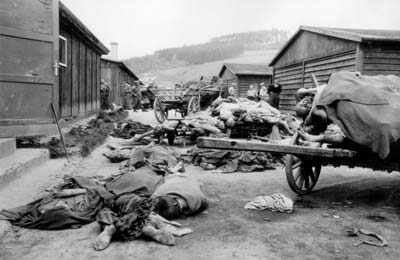 Cart with dead bodies, May 8, 1945. (photo credits: U.S. Signal Corps Fotos; Courtesy of NARA)After the concentration camps had been liberated, the Allies often forced the local population to carry out cleanups and to take care of the survivors. This was partly done because the urgency of the situation demanded it. Secondly, by means of their re-education policy, the Allied command staff intended to demonstrate to the German and Austrian people the consequences of their – supposed or actual – political loyalties.

US camp commander Keach demanded that the mayor of Gusen provide several hundred civilians to dig mass graves, to carry out cleanups and to help improve the overall sanitary conditions. On 8 May 1945, the town’s population above the age of 12 reported for duty in the liberated camp of Gusen. This was the first time that the population was directly confronted with the consequences of the events that had taken place over many years in their immediate environment. 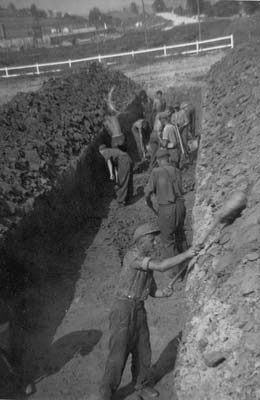 Soldiers of the German &quot;Wehrmacht&quot; digging graves; apart from the local population also German POWs were brought in for the burial of dead prisoners in Gusen. (photo credits: US Signal Corps Photo, Courtesy of USHMM, Washington)„I think one of the most shocking things that took place was the indifference of the civilian population to what had been going on in the camp. At the time that the bodies were taken out of the gas chambers and the ones that were dead in the streets, to do this I went into town and brought out all the male population that were old enough or young enough that could actually physically engage in work to bring carts, wheelbarrows, whatever they had to take the bodies out. And at the same time, the female population and the children were brought out to see just what had taken place in the camp. (...)“

“Dear Lillie, I’m writing this letter mostly to get something off my mind and also to give you an idea how some of the people had to live under the rule of Nazism. (…) The other day I visited one of these concentration camps we’ve often heard about. All of what I tell you is the truth for I personally saw it all. Every soldier here should go through this place. I don’t guess anyone could forget any of the horrible sights.

(…) We drove further on into the main part of camp. There we saw some of the most horrible sights that anybody wants to see. Here were kept people of all nationalities from Russians to Spaniards. They told us things which are inconceivable. As soon as we parked the peep all of these ghostly figures came crowding around us. They wanted food, water, cigarettes (…) I took a few pictures of them for which they were more than glad to pose. It was a warm day and the awful stink from these supposedly humans made it unbearable to stick around too long. 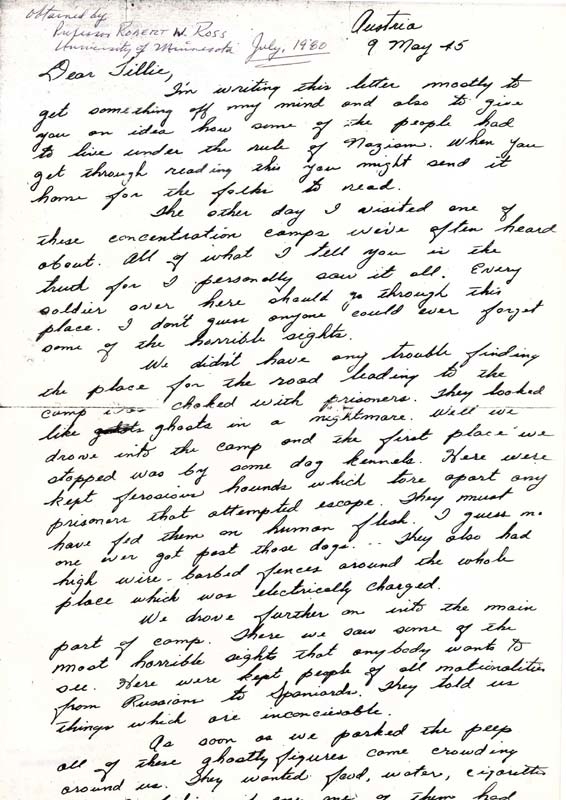 Letter of US-soldier Luis Cernjar to his wife, May 9th, 1945. (Documentation Centre of Austrian Resistance, Vienna)

Excerpt from a letter written by the US soldier Luis Cernjar to his family on May 9th 1945 (Documentation Centre of Austrian Resitance, Vienna).