Installation of US Millitary Administration 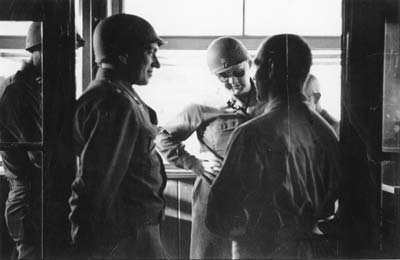 To the left, leaning on the doorframe, commander of the liberated camp of Gusen Lt. Col. Milton W. Keach, at the center, wearing sunglasses, his deputy Major Charles R. Sandler during a talk with former prisoners in Gusen. (photo credits: Courtesy of Maj. Charles R. Sandler, US 11th Armored Division, 21st Armored Infantry Battallion)By the evening of 6 May 1945, Lieutenant Colonel Milton W. Keach of the 21st Infantry Battalion had been appointed administrator of the liberated camp Gusen. Although the allied secret services and military command staff had known about the existence of and conditions in the camps Gusen and Mauthausen for some time, the 11th Armored Division arrived at these camps completely unprepared.

Without a clear idea of the extent of the problems to be resolved and without adequate experience, the new administration took up its task on May 7. Only some 1000 prisoners were still in Gusen at the time, most of them ill and weak. The corpses of 200 to 300 prisoners were lying around on the camp premises. Those who were physically able had left the camp, either for Mauthausen or to search the surrounding area for food. 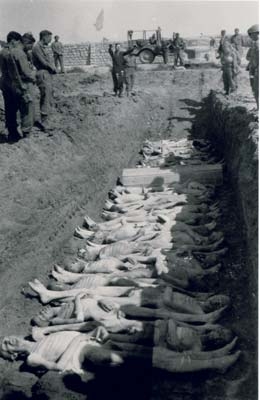 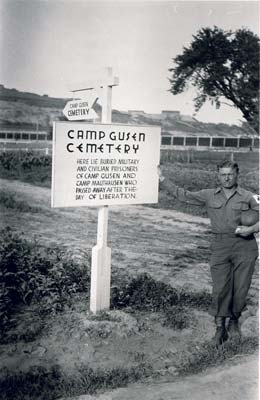 US soldier in front of sign indicating mass grave. (photo credits: US Signal Corps Foto, Courtesy of USHMM)In the days that followed, several thousand liberated prisoners were recaptured by the 11th Armored Division and brought back to the camp, increasing their number to some 8,000 again. The main problem the camp administration now faced was the burying of the dead, medical care of the ill, the supply and rationing of food, and the fight to head off epidemics – particularly typhus and tuberculosis – to which dozens of prisoners were succumbing to every day. In order to cope with this situation to some degree, the 11th Armored Division reverted to the resources of military units stationed nearby, healthy prisoners and the local population. 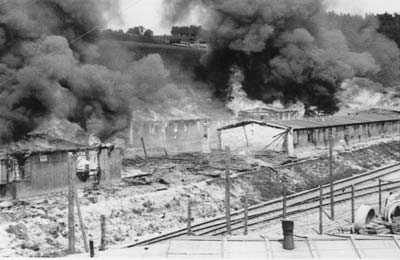 Due to catastrophic hygienic conditions and the imminent danger of spreading diseases, the barracks of camp Gusen II were burnt down by the US miltary administration on May 17th 1945. (photo credits: Courtesy of Maj. Charles R. Sandler, US 11th Armored Division, 21st Armored Infantry Battallion)

„(...) I don’t think there was anyone that was prepared to cope with this anyway. How can they give you directives on something that they don’t know anything about? This was something that was a new experience for anyone. But the only thing that you could do was use logic. And the only thing that seemed logical to do was to try and maintain the camp in its present state because it was obvious that something was going to be done in the near future; that there would be a follow-up on the discovery of the camp. (...)
I did ascertain that [the prisoners] did have food; to continue the rations exactly the same way that they had been, and to just maintain the camp exactly the same way as it was until there were supplies and medical personnel and whatever could come in and take charge of the situation.“

Excerpt from an interview with Reginald Ashby, former Staff Sergeant, 21st Infantry Battalion, 11th Armored Division, the US Army unit responsible for the administration of the liberated camp at Gusen, as of 6th May 1945.
(USHMM, Washington)