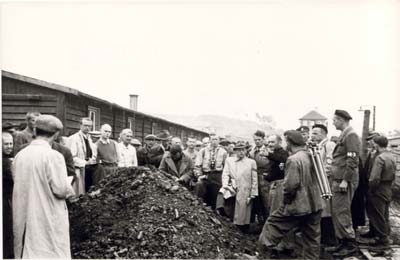 International journalists gather in front of an ashpile near the crematorium in Gusen I; apart from the Signal Corps teams, who were carrying out a military order, photographers of civilian news agencies also came directly to the location – frequently upon the official invitation of the allied military. In addition, allied soldiers used their private cameras to preserve what they had found in the camp for the future. (Photograph of the Czechoslowakian news agency ČTK; Courtesy of ČTK)Most of the photographs of the camp of Gusen directly after liberation were taken by the US Signal Corps.
The Signal Corps was a military branch directly subordinate to the War Department, whose key task was first and foremost to develop communication technologies and communication security for the purposes of the US Army. In addition, the Signal Corps also provided photographic and film material, which served training and information purposes. 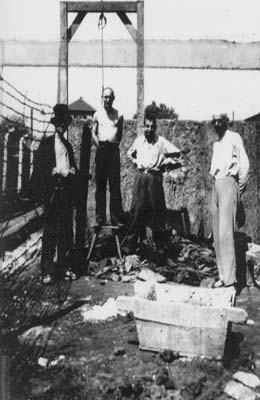 Photograph of a stage execution at the execution wall at Gusen I, May 1945. (photo credits: U.S. Signal Corps Photos; Courtesy of USHMM)Apart from the collection of evidence for future war crime trials, the photographic documentation of the conditions prevailing in the liberated concentration camps also intended to inform the people of the world and the re-education of the German population. Reproduction of Signal Corps photographs can therefore be found in public media in Germany and the US, but also in the files of the court proceedings against the perpetrators. 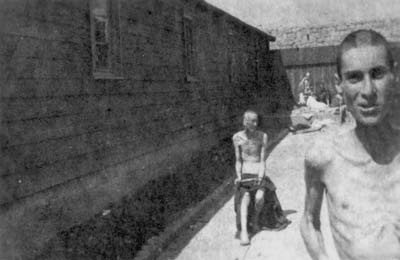 Liberated prisoners of Gusen in deplorable physical state, May 1945 (Photography of US Signal Corps; Courtesy of USHMM, Washington)Most of the photographs of the Signal Corps were taken within the first few weeks after the camps had been liberated and thus only represent the chaotic final phase, the period directly prior to and after liberation. The photographs often depict mounds of prisoners who had died when the SS administration had stopped working and the US military administration had not begun in the liberated camps. Still, these photographs continue to define the impressions and imagery of the horrors of concentration camps even decades after liberation, as they were the first – and in some cases the only – photographic documentation from the camps to which the public had access. 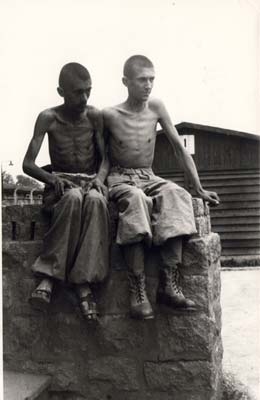 Two liberated prisoners outside Barrack 1 at Camp Gusen I. (Photograph of the Czechoslowakian news agency ČTK; Courtesy of ČTK)Every image results from an act of objectifying the terror. The iconography of concentration camps, which evolved within only a few weeks due to the surge of documentary pictures of the camps, says at least as much about individual ways of coping with the found suffering on the part of the photographer and liberator, as it does about the suffering as such.