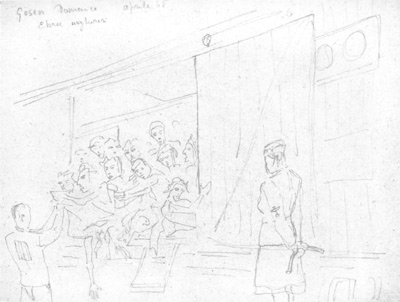 The drawing was done by Belgiojoso after liberation and shows the unloading of a carriage transporting female prisoners. The female warden on the left side of the picture probably belongs to the transport guard. From February 1945 onward, transports from the abandoned eastern camps, in particular from Auschwitz, brought Jewish prisoners, including a large number of Hungarians, to Gusen. The trip took several weeks and many of the prisoners died on the way. Their bodies were either thrown out of the train during the journey or cremated upon arrival. Many of the deportees were so weakened by their ordeal that they died soon after their arrival, or were selected to be killed. (A.N.E.D., Milan)Shortly after the German occupation of Hungary in March 1944, a special command headed by Adolf Eichmann was placed in charge of implementing the „Final Solution“ in Hungary. The majority of the Jewish population was first put into ghettoes and subsequently deported to the Auschwitz extermination camp. In April 1944, Hitler personally authorised the selection of 100.000 Jews for labour purposes, in particular for the construction of underground industrial facilities. As a result their termination was temporarily suspended.

The first Hungarian Jews – approximately 2.700 – arrived at Gusen in large scale transports from Auschwitz between the end of May and the middle of June 1944. They were intended for tunnel construction at St Georgen and were mostly housed in camp Gusen II. In August and September of 1944, additional smaller transports of Hungarian Jews came in. In January 1945, finally, more Hungarian Jews were evacuated to Gusen from Auschwitz.

The mortality rate of among this group of prisoners was enormous. Within less than a year, more than 2.100 of the 3.500 Hungarian Jewish prisoners at Gusen died there or were brought to Hartheim to be gassed. Hundreds were taken to Mauthausen to die.