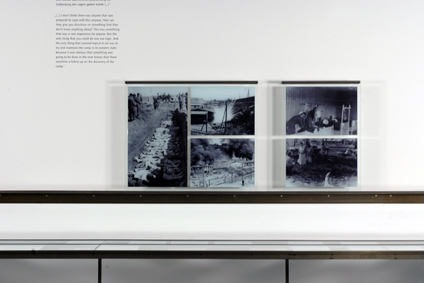 (photo credits: Andreas Buchberger)In May 2004, a new visitor centre directly adjoining the Memorial Gusen opened its doors to the public. The exhibition on display at the centre since November 2004 not only unearths the material remains of the camp itself but also documents the marks the camp left on people’s memories. During the construction of the visitor centre, workmen found remnants of the foundations of the former crematorium barracks which today forms one of the focal points of the exhibition. Visitors can inspect the remnants through an opening in the floor. In addition diverse texts, photographs, and other documents trace the crematorium building’s history. These physical remnants also serve as the starting point for an introduction to the topography of the former camp and how it related to the surrounding region.

Based on photographs taken by the SS records department – the “Erkennungsdienst” – during the camp’s construction, a separate part of the exhibition documents its architectural development. These images of the camp’s structure provide telling evidence of the power of space and the functional requirements of camp architecture exerted over the mass of prisoners.

The exhibition part designated “Forced Labour” provides information about the work deployment of prisoners in the quarries, and as from 1943 in the armaments industry at the armaments factories Steyr-Daimler-Puch AG and Messerschmitt GmbH, and for relocating the armaments industry underground. In the exhibition part designated “Extermination”, the systematic mass killing of prisoners is being described. The development of the prisoner society against the background of structural changes at the Gusen Concentration Camp is shown in yet another part of the exhibition. This is also where the representation of the various groups of victims belongs. Nine biographies of prisonors illustrate the particular groups. 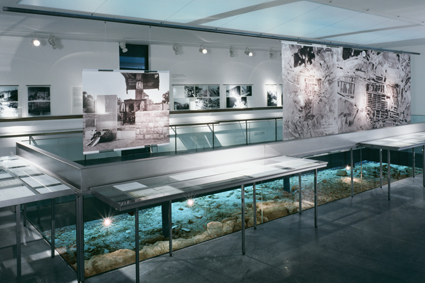 In addition to texts, photos and facsimiles of original documents, also a film with interviews of contemporary witnesses lasting about one hour is being shown at the exhibition.

Yet another section of the exhibition addresses the events around 5th May 1945, in particularly as they presented themselves to the US liberators. Their efforts to provide the public with information resulted in a veritable flood of images of the liberated camp, some of which continue to define the public perception of concentration camps in general. 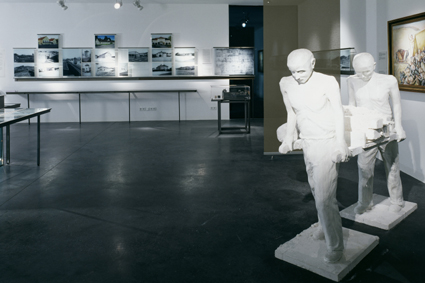 Commissioned by the Federal Ministry of the Interior (BM.I).

Special thanks of the curators go to the KZ Gusen Memorial Committee, especially to Martha Gammer and Rudolf A. Haunschmied, who have both been contributing to the commemoration in Gusen for many years and did not hesitate to support the realization of the exhibition.