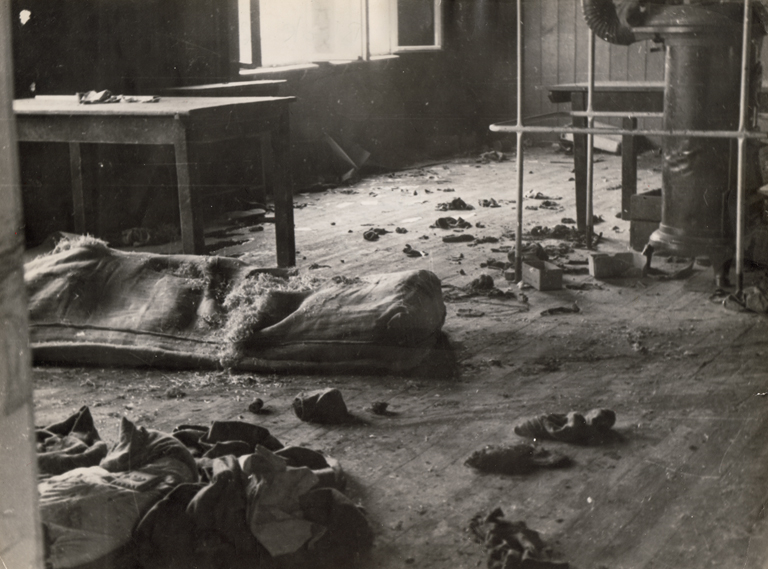 Interior of Block 20, 2. Februar 1945 (photo credits: Mauthausen Memorial / Collections)On the night of 1-2 February 1945, around 500 so-called ‘K’-prisoners in Block 20 undertook a breakout. From early 1945, the ‘Kugel Erlass’ (‘Bullet Decree’) had led to the deportation of between 2,000 and 5,000 people to Mauthausen as ‘K’-prisoners. Above all these were Soviet officers who had been captured as prisoners of war and had attempted to escape, as well as forced labourers who had been accused of sabotage or political activity. These prisoners were to be murdered in Mauthausen. The SS executed at least 350 of them. The majority, without being recorded as regular prisoners, were simply left to die in Block 20, which was isolated from the rest of the camp by an electrified barbed wire fence and a stone wall. The prisoners had to sleep on the floor, were given barely anything to eat and therefore had no chance of surviving.

Given the hopeless situation in Block 20, in February 1945 over 500 ‘K’-prisoners attempted a mass breakout. Armed with paving stones, fire extinguishers and pieces of soap and coal, they attacked the watchtowers and threw wet blankets over the electric fences. The short circuit this caused allowed them to scale the camp wall. Many of those fleeing soon collapsed due to their poor physical condition. Others died in the hail of bullets fired by the guards. 419 people managed to escape.

Seriously ill prisoners who had remained in Block 20 were murdered by the SS that night. At the same time, the SS initiated a large-scale manhunt, in which it was joined by the local police, the Wehrmacht and the home guard, as well as by numerous civilians from the local area. Almost all the escapees were caught again. Most were murdered on the spot, the rest in the Mauthausen concentration camp. This search and murder operation was known cynically as the ‘Mühlviertel Hare Hunt’. It is thought eleven people survived. Their lives were saved by forced labourers working in agriculture and a handful of farming families in the Mühlviertel region who resisted joining in with the killing.