The System of Prisoner Functionaries

In order to control the large number of prisoners, the SS utilised so-called Funktionshäftlinge, or prisoner functionaries. It was their job to maintain order in the camp. In return they received certain privileges. Many became the willing agents of the SS. Others also used their position to protect fellow prisoners.

At the head the prisoner hierarchy was the Lagerälteste (camp elder). He was responsible to the SS for maintaining order throughout the camp. Under him were the Blockälteste (block elders), each of whom controlled one accommodation barracks. The Lagerschreiber (camp clerks) were employed by the SS for administrative tasks in the prisoner camp. The so-called Kapos guarded the prisoners at work.

At first, most of the prisoner functionaries were Germans and Austrians who had been imprisoned as criminals. Later these positions were increasingly filled by political and sometimes non-German prisoners. 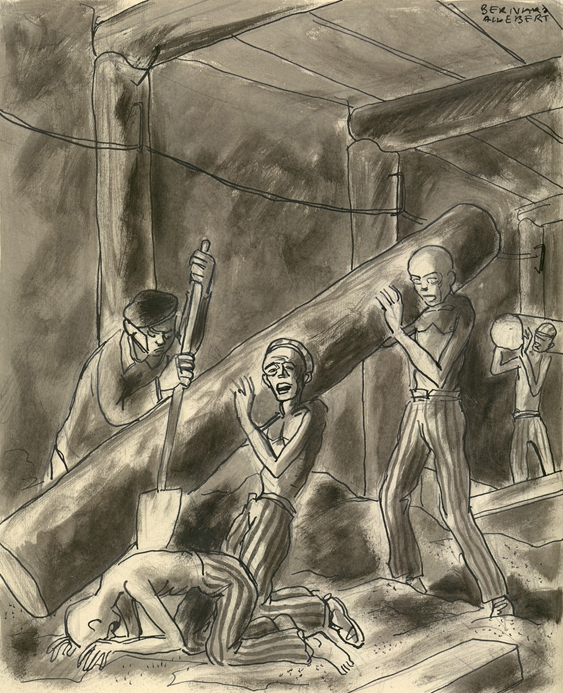 Drawing by Bernard Aldebert: "Gusen II", 1945 (Illustration: Mauthausen Memorial / Collections)Prisoner functionaries were caught between the two sides. On the one hand, their position – provided they remained in favour with the SS – gave them a relatively assured chance of survival. On the other, they were regularly exposed to the hatred of the other prisoners. Prisoner functionaries could use their position both to protect fellow prisoners or brutally assert their own interests and those of their personal favourites. Living conditions for the mass of prisoners depended to a large extent on the actions of the prisoner functionaries. They controlled the allocation of rations and clothing, to some degree the make-up of the different work detachments, and also simply daily life in the barracks.