On 12 March 1938 the ‘Anschluss’ (‘Annexation’) of austrofascist Austria to the German Reich took place. Two weeks later, the National Socialist Gauleiter (regional head) of Upper Austria, August Eigruber, announced to an enthusiastic audience that his Gau would have the ‘distinction’ of building a concentration camp. The location chosen was the town of Mauthausen on the Danube. Political opponents and groups of people labelled as ‘criminal’ or ‘antisocial’ would be imprisoned here and forced to work in the granite quarries. 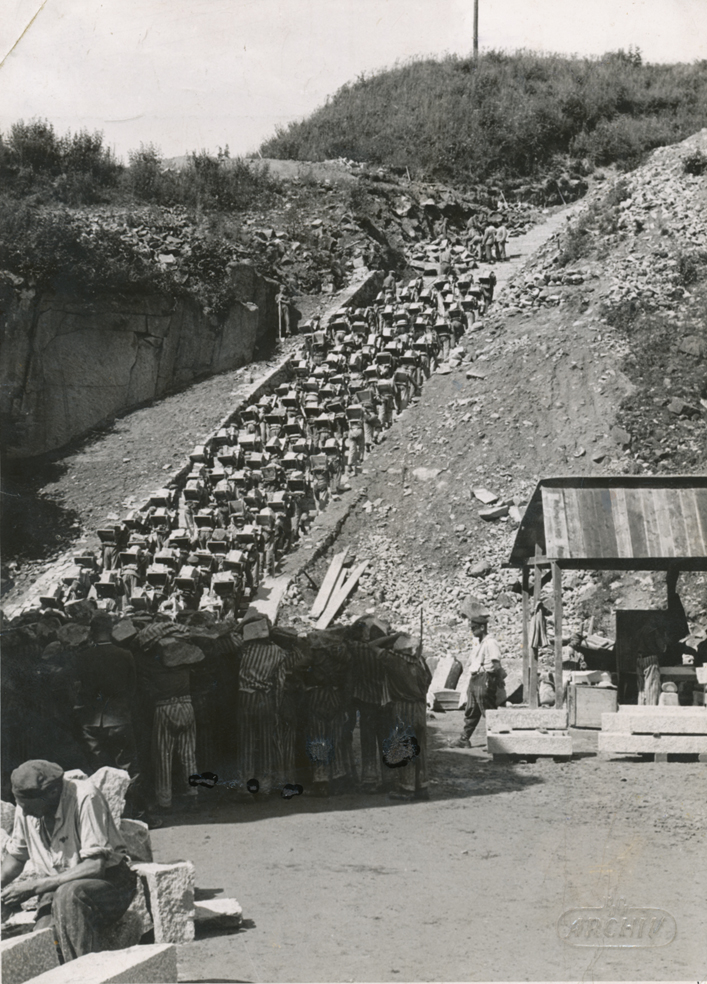 Prisoners transporting stones on the "stairs of death", SS photo, between 1942 and 1944 (photo credits: NIOD, Amsterdam)On 8 August 1938 the SS transferred the first prisoners from the Dachau concentration camp. During this phase, the prisoners, who were all Germans and Austrians and all men, had to build their own camp and set up operations in the quarry. Their daily lives were shaped by hunger, arbitrary treatment and violence.

In December 1939 the SS ordered the construction of a second concentration camp just a few kilometres from Mauthausen. The Gusen branch camp officially went into operation in May 1940.

After the outbreak of war, people from across Europe were deported to Mauthausen, which gradually developed into a system of several interconnected camps. During this phase, Mauthausen and Gusen were the concentration camps with the harshest imprisonment conditions and the highest mortality. Prisoners at the bottom of the camp hierarchy had barely any chance of surviving for long. Those who were ill or ‘useless’ to the SS were in constant danger of their lives. In 1941 the SS started to construct a gas chamber and other installations at Mauthausen for the systematic murder of large groups of people.

During the second half of the war the prisoners, who now included women for the first time, were increasingly used as forced labourers in the arms industry. In order to accommodate the prisoners where they worked, the SS established several subcamps. Newly-arrived prisoners were transferred to these camps from the main camp. More and more, Mauthausen itself became a camp were the sick and weak were sent to die.

Since the prisoners were now needed for their labour, living conditions improved for a short time. From the end of 1943 onwards, inmates were also deployed in the construction of underground factories, for example those in Melk, Ebensee and St. Georgen an der Gusen. The murderous working conditions that prevailed at these sites soon led to a dramatic rise in the number of victims. 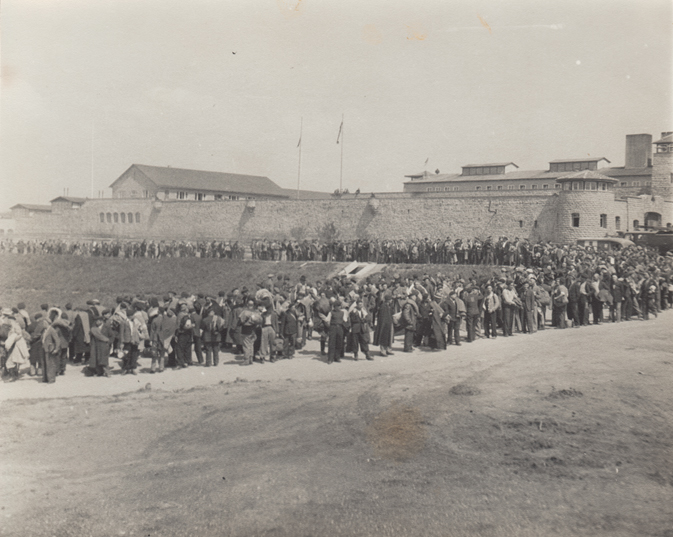 Liberated prisoners leaving the camp, May 1945 (photo credits: Collection Stephanie Soldner Sullivan)Towards the end of the war, the Mauthausen concentration camp became the destination for evacuations from camps near the front line. Tens of thousands of prisoners arrived on several large transports. Overcrowding, lack of food and rampant disease led to mass death among the prisoners in the final months before liberation.

On 5 May 1945 the US Army reached Gusen and Mauthausen. Some prisoners were in such a weakened state that many still died in the days and weeks after liberation. Of a total of around 190,000 people imprisoned in the Mauthausen concentration camp and its subcamps over seven years, at least 90,000 died.