Prosecution of the Perpetrators in the Courts 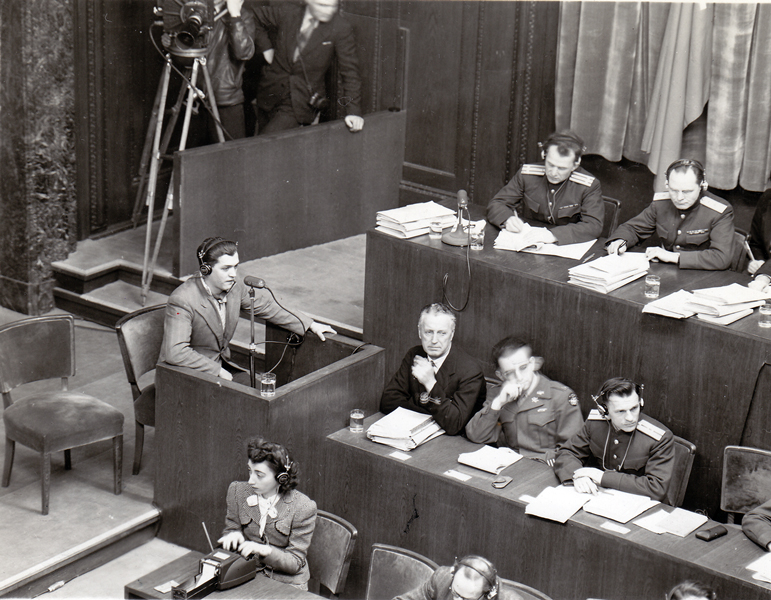 Statement of Mauthausen survivor Francisco Boix at the Internationalen Military Tribunal in Nuremberg, 1946 (photo credits: US National Archives and Records Administration)Just a few days after the liberation of the Mauthausen concentration camp, an investigating commission of the US Army began to collect evidence in preparation for war crimes trials. Much of this evidence had been saved from destruction by concentration camp prisoners, despite the risk this posed to their own lives. Photos smuggled out of the camp, documents written by the camp SS and statements taken from witnesses to the crimes were the foundation that made it possible to convict members of the SS and some individual prisoner functionaries for their crimes.

From 29 March to 13 May 1946, the largest trial of crimes committed at the Mauthausen concentration camp took place in Dachau. In the so-called Main Case or Parent Case, named after the first of those accused alphabetically – ‘United States vs. Hans Altfuldisch et al.’ –  61 defendants were convicted. This main trial was followed by 61 trials on the same set of crimes. The selection of defendants was intended to represent a cross-section of perpetrators: not only were all SS ranks from SS-Schützen to SS-Sturmbannführer represented, but also civilian workers and prisoner functionaries.

Former Chief Camp Physician Eduard Krebsbach (left) in front of the Dachau Military court, 1946 (photo credits: US National Archives and Records Administration)Of the 61 defendants in the main trial, 58 were sentenced to death; in 49 cases the sentence was carried out. At the follow-up trials, which began in spring 1947, the sentences handed down were significantly more lenient. Of the 306 people against whom charges were brought, 37 were executed. The rest were given what were, in some cases, long prison sentences but they were released on probation as early as the early 1950s.

The other occupying powers also held a small number of trials for crimes committed in the Mauthausen/Gusen concentration camp complex. While the Soviet Union mainly tried people for their participation in the ‘Mühlviertel Hare Hunt’, in the British zone a trial was held against the personnel of the Loibl Pass concentration camp subcamp, which resulted in two death sentences. There were also convictions in the French zone, including at least one death sentence.

At the same time as the Allied trials, thousands of trials took place in special courts in Austria between 1945 and 1955, the so-called People’s Court Trials. The only death sentence handed down by a People’s Court for crimes in connection with the Mauthausen/Gusen concentration camp concerned a former prisoner. Of the former members of the SS given prison sentences, by 1955 all had been released. After 1955 the number of Austrian trials against Nazi perpetrators dropped dramatically. On 12 February 1975 the last Austrian trial against a former SS man, Johann Gogl, for crimes committed in the Mauthausen and Ebensee concentration camps ended in acquittal.