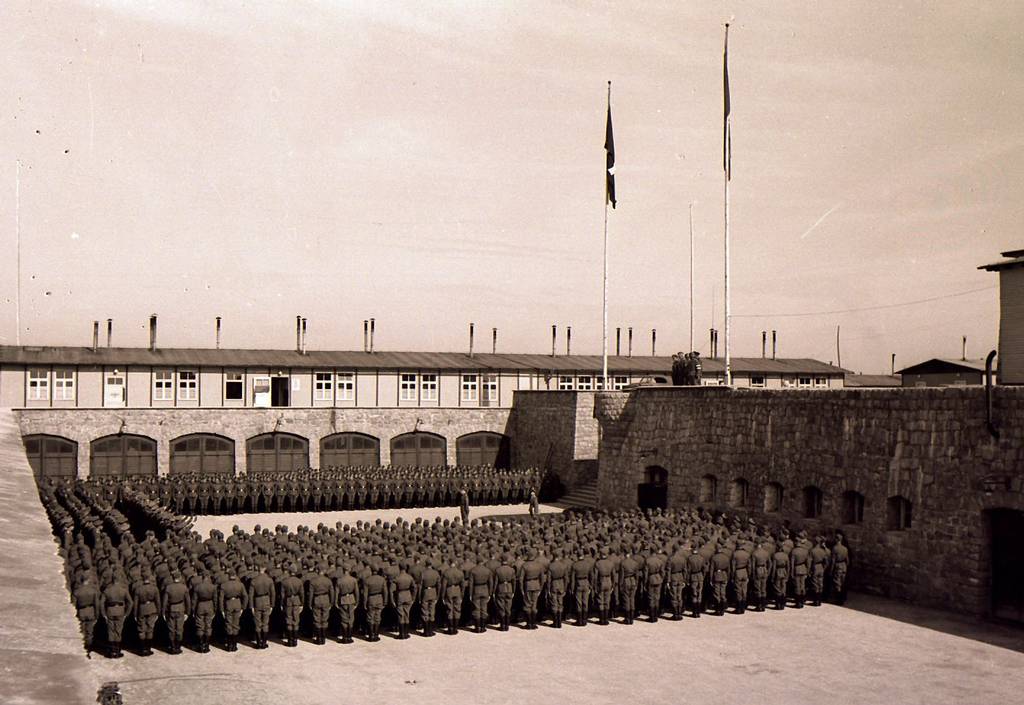 Swearing-in of SS-Men in Mauthausen, 20 April 1941 (photo credits: Mauthausen Memorial / Collections, Collection Mariano Constante)In August 1938, members of the SS were transferred from Dachau concentration camp to Mauthausen along with the first prisoners. The task of the SS was not only to guard to prisoners but also to manage the internal organisation of the camp.

At the head of the camp SS was the Kommandant (commandant); with very few exceptions, all camp personnel were subordinate to him.

The first commandant of Mauthausen was the carpenter Albert Sauer. However, poor appraisals and frequent complaints led to his removal after just a few months. In February 1939 he was replaced as commandant by Franz Ziereis, a former career soldier. Ziereis was in charge of Mauthausen for six years, making him one of the longest-serving commandants of a single concentration camp. Ziereis and other members of the SS fled at the end of the war but he was tracked down and mortally wounded during exchange of fire with US Army soldiers. Before his death he made a detailed confession.

The Gusen concentration camp was subordinate to Mauthausen but had a certain level of autonomy. The regime of terror perpetrated there by the heads of camp, Karl Chmielewski and Fritz Seidler, at times led to a higher death rate than in the main camp.

Members of the Kommandanturstab (camp administration) were responsible for internal operations in the concentration camp. The administration was made up of around 250-300 people working in six different departments:

Members of the camp administration, Mauthausen concentration camp, August 1943 (photo credits: Centre d’Histoire de Sciences Po, Archives d’histoire contemporaine, fonds Charles Dubost, Paris)Guard units were responsible for guarding the external perimeter of the concentration camp, work detachments and prisoner transports and made up the majority of the camp SS. While in 1938 only a few hundred members of the SS belonged to the guard units at Mauthausen concentration camp, in March 1945 the total number reached over 5,000 in the main camp alone, with a further 4,000 stationed in the subcamps.

Towards the end of the war little remained of the original composition of the guard units. While at first only SS members from Germany and Austria guarded the camp, from 1941 an increasing number of ‘ethnic Germans’ – members of German-speaking minorities, in particular from Romania, Hungary, Croatia and Slovakia – were recruited. From autumn 1943 they were joined by eastern European ‘Hilfswillige’ (‘volunteers’), mostly Ukrainians. However, they were not official members of the SS but SS-Gefolge (SS-Aides). From 1944 onwards, Wehrmacht units were also used to guard the subcamps in which concentration camp prisoners were being forced to produce armaments for the Wehrmacht.