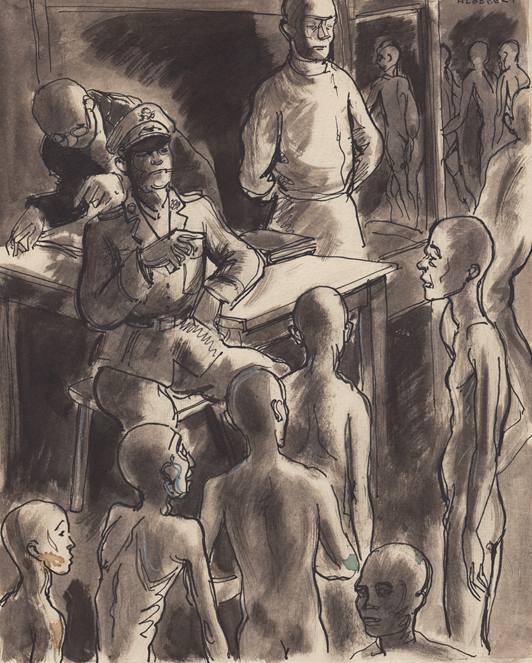 Drawing by Bernard Aldebert: „Revier de Mauthausen – Le tris des condamnés“ (Sick barrack in Mauthausen – Separating out the condemned), 1945 (Mauthausen Memorial / Collections)
Prisoners’ lives in the concentration camps were constantly under threat; death was omnipresent. Not enough to eat and back-breaking physical labour drained the prisoners’ strength, leaving them emaciated. Working without proper equipment led to any number of injuries. Close quarters in the barracks and a lack of hygiene in the camp encouraged the spread of infectious diseases.

The SS sought to prevent the uncontrolled outbreak of epidemics. In contrast, medical treatment for individuals was reduced to a minimum. Only a few privileged inmates received adequate medical care in what was known as the infirmary. There the prisoners were treated mainly by doctors and orderlies who were also inmates.

Most of the seriously ill prisoners were housed in the Sonderrevier (special camp) and later in the Sanitätslager (infirmary camp). Prisoners who had become unfit for work through illness were seen as useless by the SS; hardly any medical care was provided for them. They were mistreated by SS doctors for medical experiments, murdered by poison injection or in the gas chamber, or left to their own devices in isolated areas of the camp.

In the special camp, an area separated off within the prisoner camp, the sick were left to die or their death was hastened through decreasing rations, forcing them to stand in their underwear in the courtyard in all weathers, or ‘hosing’ them down with cold water and then sending them naked out into the cold.

The infirmary camp was located outside the actual prisoner camp and consisted of several wooden barracks surrounded by an electrified barbed wire fence. Construction on it finished in summer 1943. Thousands were housed here without enough to eat or adequate medical care and left to die. Many of the sick had previously been transferred back to the Mauthausen concentration camp as ‘unfit for work’ from one of the 40 or so subcamps. SS doctors regularly carried out ‘selections’ in the special camp and infirmary camp, during which they separated the ‘incurable’ from the ‘curable’. These selections were feared since a doctor’s negative appraisal of a prisoner’s physical state in practice meant his death. 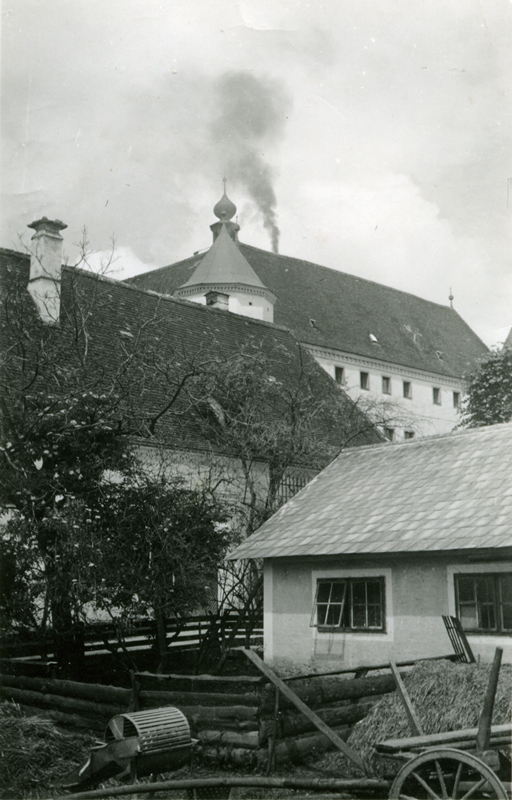 Smoke from the crematorium oven over Hartheim castle, 1942 (Dokumentationsstelle Hartheim)In early 1941 the SS began ‘Aktion 14f13’, a centrally-planned killing operation of weak and sick concentration camp prisoners. Starting in August 1941, panels of doctors selected those who were seriously ill from the Gusen and Mauthausen concentration camps and transported them to the Hartheim killing facility near Linz. They were usually asphyxiated in the gas chamber shortly after their arrival and their bodies were then burned in the cremat

orium there. Around 5,000 prisoners from Mauthausen and Gusen and around 3,000 from Dachau concentration camp were gassed in Hartheim as part of ‘Aktion 14f13’.