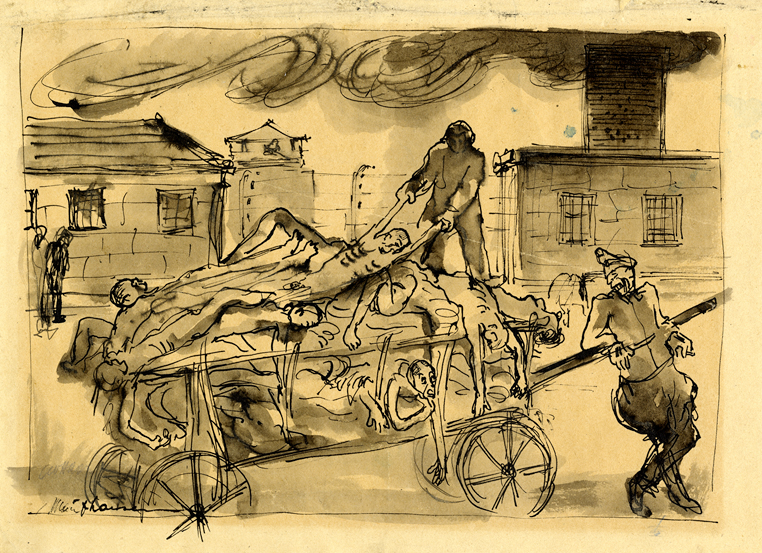 Drawing by Leo Haas: „Před krematoriem“ (In front of the crematorium), 1945 (Památnik Terezín)The SS and police used the concentration camps as execution sites for political opponents from the beginning of the war. This applied in particular measure to the Mauthausen and Gusen concentration camps. In 1940, both were classified as the highest ‘Grade 3’ camps. These were the camps to be used for prisoners sentenced to the most severe prison conditions. Many were deported to Mauthausen and Gusen simply for execution.

In Mauthausen, shootings initially took place on the execution site outside the camp fence. At the end of 1941 an apparatus for shooting prisoners in the back of the neck was installed in the crematorium basement. This was meant to simplify and rationalise the process of execution. In autumn 1941 construction began on a gas chamber in Mauthausen and, in March 1942, the SS carried out the first murders using poison gas. The first victims of the gas chamber were Soviet prisoners of war who had been transferred to the Mauthausen concentration camp for execution from Wehrmacht camps for political reasons. Subsequently, the gas chamber was used predominantly for murdering groups of political opponents and only at a later point in time for exterminating the camp’s sick prisoners. By the end of the war, at least 3,500 inmates had been murdered in the gas chamber at Mauthausen.

In Gusen the SS did not construct a separate gas chamber but for this camp too, proof exists of at least two cases of sick prisoners being gassed in accommodation barracks, claiming at least 800 lives. In addition, in 1942 and 1943 a gas truck travelled between Mauthausen and Gusen in which at least 900 sick prisoners were asphyxiated during this period.

Lt. Jack Taylor with the gas filling apparatus of the gas chamber, May 1945 (photo credits: US National Archives and Records Administration)Due to the rising number of dead and murdered prisoners, in 1940 the SS had its own incinerators installed at both Mauthausen and Gusen, and later at the Melk and Ebensee subcamps. This not only enabled the SS to dispose of the corpses in an efficient way, but it also meant it could destroy the traces of its violent crimes inscribed on the bodies of the dead.