Medicine is a subject that is inextricably linked with the history of Nazi concentration camps - and by extension the Holocaust: Nazi doctors used concentration camp prisoners for experiments and on the basis of selection procedures decided who would be murdered and who would be allowed to live so that their labour could be exploited; physicians imprisoned in the camps risked their own lives to contain epidemics, procure medicine and save prisoners from death; nurses struggled to care for sick fellow prisoners under the most difficult conditions; Allied medical personnel treated the sick after the liberation of the camps.

The 13th Dialogue Forum Mauthausen will give national and international scholars a forum to present and discuss their research findings on the Holocaust and Nazi medicine. In lectures, workshops and guided tours held over two days, speakers, professionals in the field and others with an interest in the conference topic will, as usual, exchange ideas and have the opportunity to deepen their knowledge of the subject.

The Dialogue Forum Mauthausen is an annual event at which an interested public is invited to follow the lectures and take part in the discussions.

This year’s Dialogue Forum Mauthausen, titled Holocaust and Nazi Medicine: Victims, Perpetrators, Rescuers, will take place from 16 to 17 September 2022 as an attendance-based event at the Mauthausen Memorial; the conference language this year will be English. For the 13th Dialogue Forum the Mauthausen Memorial has not only brought together international experts on the subject of medicine and the Holocaust, but is also pleased to welcome the Israeli film-maker Itamar Wexler, who will present his documentary The Voyage at an exclusive Austrian premiere on the evening of 16 September in Linz. Tickets can be obtained in advance and from the box office on the night.

20:00
Film at Moviemento, OK-Platz 1, 4020 Linz
The Voyage (D: Itamar Wexler) in attendance of the director | ticket sale via www.moviemento.at
in cooperation with Memorial Site Hartheim Castle – Place for Learning and Remembrance
Documentary about the director's grandmother who was left behind when her family fled Nazi Germany and later was murdered by involuntary euthanasia. 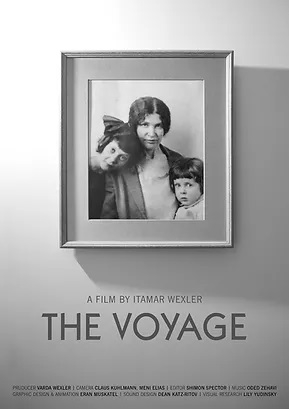 Tessa Chelouche
A Nurse Survives the Holocaust in the Jewish Hospital of Vienna: The Story of Mignon Langnas
Astrid Ley
Eugenic Sterilization and the Concentration Camp System. The Rivalry between Normative State and Prerogative State in Nazi Germany
Agnieszka Witkowska-Krych
Nurses in the Warsaw ghetto
Teresa Wontor
Medical Help for Liberated Auschwitz Prisoners in Documents of the Soviet Medical Commission