Present times are characterised by polarisation and escalation of societal debates. The systematic border transgressions by some players are aimed at achieving a division of society. Such discourse does not even stop at distorting historical facts. Recently, a lawyer in Wels, Upper Austria, defended a client accused of National Socialist activities by openly raising doubts about the existence of a gas chamber at the Mauthausen Concentration Camp.

In the name of the victims and of their remembrance, the staff members of the Mauthausen Memorial consider it their duty to very clearly rebut such statement, even if such rebuttal, in view of the current status of historical research, would seem like a setback into dark ages. The use of a gas chamber at Mauthausen is a historical fact, substantiated by a plethora of evidence. Among such evidence are even testimonies given by persons responsible for operating the gas chamber, such as former SS commander Martin Roth. All this can be seen and read in the historical exhibitions at the Memorial, as well as in numerous publications, among them the pioneering work of Mauthausen survivor Pierre-Serge Choumoff.

The doubts about the existence of a gas chamber at Mauthausen have their origin in assertions made by Holocaust deniers and revisionists of history, and should no longer have any place in serious public debates. It is the task of society as a whole to counter such borders transgressions, before they can permeate into social mainstream. 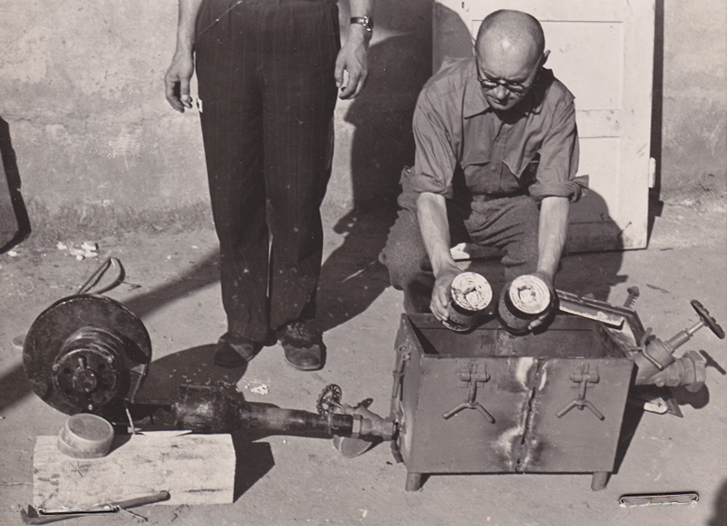 Photo: The US Army lieutenant and former concentration camp prisoner Jack Taylor with a gas charging device for the gas chamber and Zyklon B cans shortly after the liberation in May 1945 (US National Archives and Records Administration)