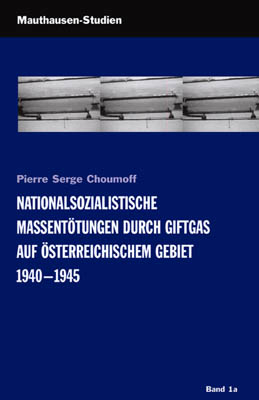 In this volume, the Mauthausen survivor Pierre Serge Choumoff presented the results of decades of research into documents which – as the title of the book suggests – are evidence of the mass killings using poison gas carried out by the National Socialist regime of terror on the territory of the present-day Republic of Austria. The infiltration of revisionist historical forgeries into public dialogue and the lack of response from historians, even in France, provided the impetus for the author’s study. The documents he collected and his analysis leave no room for lies or doubt.

The focus of the book is a detailed description of the murders carried out using poison gas in the gas chamber of the Mauthausen concentration camp, in the Gusen branch camp, in a gas truck that drove between the two camps, and at the Hartheim Castle ‘euthanasia facility’, disguised by the National Socialists under the codename ‘Prisoner Sanatorium Dachau’.

In these studies, Pierre Serge Choumoff came to the conclusion that at least 35,000 people were murdered using poison gas in Mauthausen, Gusen and Hartheim.

The author was born in 1921 in Paris. He was arrested by the German occupiers in 1942 while active in the resistance and was deported to Mauthausen and Gusen. Starting in 1968 he worked tirelessly on the subject of this book and also served on the historical commission of the French Amicale and as vice president of the International Mauthausen Committee. He died in 2012 in Paris.

The French edition was published as volume 1b under the title "Les Assasinats Nationaux-Socialistes par Gaz en Territoire Autrichien 1940-1945".